RESEARCH INTERESTS & BACKGROUND:
I am interested in reptile and amphibian conservation, population and landscape ecology, and particularly the utility of models in answering the “unanswerable” questions pertaining to wildlife management (i.e. questions that cannot be addressed through observation alone). As an undergraduate at Davidson College, I had the opportunity to lead numerous research projects, primarily focusing on the conservation of the critically endangered bog turtle (Glyptemys muhlenbergii). As a chapter of my senior honor’s thesis, I collaborated with the North Carolina Wildlife Resources Commission to evaluate the effect of age class and sex on bog turtle survival in NC. This study was the first to describe bog turtle population demography on a statewide scale and thus, our findings filled in crucial knowledge gaps for bog turtle populations in the southern U.S. Through my undergraduate experiences, I gained proficiency in spatial analysis, individual-based, and population modeling approaches and hope to apply these skill sets to my future research projects.
Currently, I am focusing on the movement behavior and space use of a timber rattlesnake (Crotalus horridus) population as related to forest management practices. I plan to integrate various factors, including rattlesnake movements, small mammal occupancy patterns, a thermal landscape model, and other environmental covariates within an individual-based modeling framework to better understand how resources, thermoregulatory needs, and landscape structure drive individual movement behavior. 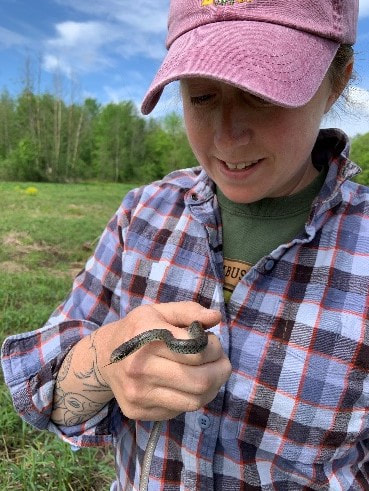