RESEARCH INTERESTS & BACKGROUND:
I am interested in research that contributes to wildlife conservation, primarily with reptiles and amphibians. Most of my work is in population ecology with a focus on spatial dynamics, especially in relation to human-altered landscapes. I feel strongly that outreach and education are key tools in conservation biology and this informs everything that I do.

I received my B.A. in Biology from Hanover College in 2010 where I studied movement and activity patterns in crawfish frogs (Lithobates areolatus). We used remote video cameras to observe novel behaviors in this previously poorly studied anuran. During this time, I also worked on the Hardwood Ecosystem Experiment with Purdue University and helped with an IPFW project looking at the dynamics of an isolated, declining copperhead (Agkistrodon contortrix) population in a landscape overrun by invasive plants.
I received my M.S. in Biology from Missouri State University in 2012. The focus of my thesis was on salamander occupancy in lowland wetlands managed primarily for waterfowl in southeastern Missouri. From 2012–2014, I continued my research with crawfish frogs collaboratively between Big Oaks National Wildlife Refuge, Indiana State University, and the Indiana University School of Medicine. From 2014–2016, I worked as an interpretive naturalist for Indiana State Parks giving educational programs and designing interpretive displays pertaining primarily to wildlife and the outdoors.

Currently, I am studying forest management effects on timber rattlesnakes (Crotalus horridus) in southern Ohio. I am interested in how management techniques, such as prescribed fire and selective logging, affect movement, thermoregulation, and survivorship within the population. We are using radio-telemetry, remote camera monitoring, and thermal modeling of the landscape to better understand the dynamics of one of Ohio’s last remaining timber rattlesnake populations. My hope is that this study will lead to a better understanding of what role active management should play in the conservation of this declining apex predator.
PUBLICATIONS:
Hoffman, A.S., A.M. Tutterow, M.R. Gade, B.T. Adams, and W.E. Peterman. 2020 (in review). Variation in behavior drives multiscale responses to habitat conditions in timber rattlesnakes (Crotalus horridus).

Hoffman, A.S., J. R. Robb, and B. E. Fisher. 2014. Recent Records for Mudpuppies (Necturus maculosus) in Indiana with Notes on Presumed Declines Throughout the Midwest. Proceedings of the Indiana Academy of Science 123(1):1–6. 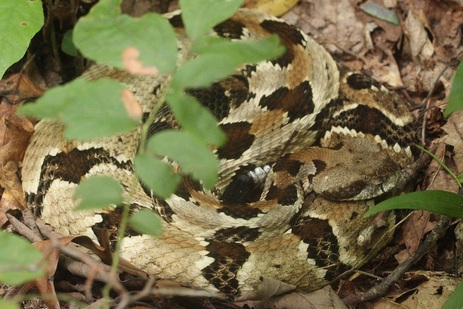